So bad it's good 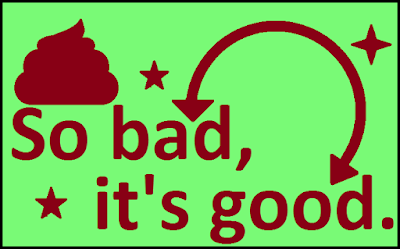 Some films are so awful, so poor that they seemingly go full circle through the spectrum of awfulness and end up, well, amazing!

These films become cult classics, they gain a following whose initial mockery and derision becomes respect and admiration. Instead of looking down at the 'art', the followers celebrate it. Rolled eyes and heads shaking in disbelief give way to cheers and fist-pumps as actors stumble, mumble, and sometimes crumble onscreen. Often the acting is great, but the script is cringe-worthily bad, sometimes the core concept is genius, other times a germ of an idea which failed to grow simply dies onscreen before decomposing into cinematic detritus for an hour or so.

Cult bad-films tend to be made with a genuine desire to create something amazing. The directors/writers/whoever may (after some time) say that the film was *meant* to be bad, but you can tell that part of them died inside when the film bombed. This section of Cult Kingdom is reserved for those bad films which are accidentally unique and unintentionally fantastic. Watchable in ways many films never achieve. Films which have clubs and followings, special screenings and memorabilia even though their popularity exists outside of the mainstream and are a universal critical failure.

Anyone can make a bad film - but only a special few are genuinely "so bad, it's good".

The first film we're looking at is the incredible: The Room