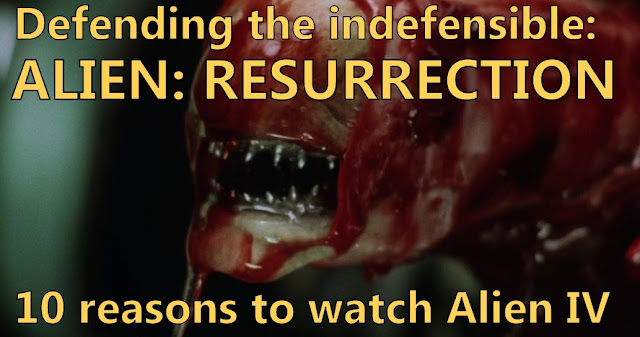 A short while after my girlfriend and I moved in together we indulged in our mutual love of film and binge watched movie boxsets. The Alien Quadrilogy along with the same universe, pseudo-prequel Prometheus gave us a good week or so of movie entertainment - especially considering that we watched *all* the bonus features on the special edition Blu-Rays we'd acquired.

It's long been accepted that Alien IV is the poorest of the set.


The first film 'Alien' is my personal favourite and a masterclass in claustrophobic storytelling. It introduces the greatest Alien baddie of all time. Playing on our most primeval base senses, the Xenomorph in all its forms is simply terrifying. It is equally familiar and alien - it has no eyes, seemingly no expression, and it has a mouth within a mouth. The design of the adult Alien along with the facehuggers are based on the human sexual genitalia, anyone who has seen the artwork of cock-obsessed genius H.R Geiger (who's artistic input resulted in the final design) will recognise the hideous majesty of his creations. Beautiful yet disconcertingly unnerving.

The second 'Aliens' film is generally the most popular, and as the pluralistic title suggests - there's more than just the one! An out-and-out sci-fi action film which is completely different to the first in tone and style - yet still manages to 'fit in' and expand the Alien universe into something more rich. It introduced some iconic tech, and gave us more strong female characters. 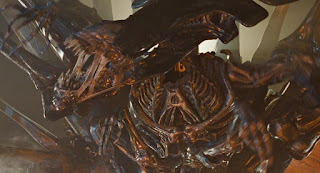 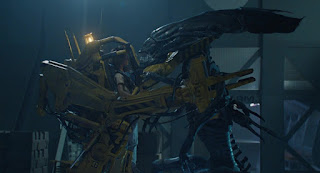 The third film undoes the second one by killing of some major characters and hitting the reset switch. Plagued by a string of directors and changes of vision, the film is a gem of an idea in a film which suffers badly from lack of cohesion, some really poor CGI and a 'made for TV' aesthetic. However, it does have one of the most iconic scenes in the franchise AND both Pete Postlethwaite and Brian Glover - any film with 2 great Yorkshiremen is worth watching.

So - Alien IV. It seems to abandon much of the horror, most of the suspense, and replaces them with zany ideas and a comedic bunch of characters, oh, and Ripley's clone! It seems ironic that a film called 'Alien: Resurrection' killed off the franchise.

The first time I saw Alien IV I was underwhelmed, massively. 15 years later I watched it again with expectations set low - but I actually enjoyed it. It felt wrong, I knew it was crap - everyone says so and I made that very same assessment with my very own eyes all those years ago. So what had changed?

Between watching Alien IV for the first time and re-watching it, I had developed a love for European cinema and directors such as Luc Besson and Jean-Pierre Jeunet were among my cinema Gods (Besson has sadly gone down in my estimation - Subway is a work of aesthetic genius, and Angel-A is perhaps the most beautiful film I've ever seen, but his involvement in Lockout is heartbreaking, the film is easily one of the worst, ever!).

Anyway, years of devouring the work of the so-called 'cinema du look' directors along with other European visionaries helped me develop an appreciation for the slightly twisted other-worldly look which injects a hint of fairytale whimsy. Watch Jeunet's award winning Amelie, or (my personal favourite of his) MicMacs and you can't help but get absorbed into a world which is simultaneously real and imaginary. If you're a newbie to European film then think Tim Burton's 2 Batman movies, they aren't tethered to a specific time - they haven't dated because they seem set in a parallel world which is very much like ours but subtly different enough to feel like a fairytale place where you accept Batman and Penguin can exist without seeming insanely implausable.

Jeunet does bring problems however, I totally accept that. His lack of English probably didn't help - the script is awful in places with clumsy lines such as "real nice party aint it?" which are cringeworthy. He simply wasn't able to filter out the weak lines while directing because he wasn't fluent enough in the language. The frequent spatters of humour don't help either, if they were there to add pathos then it could have enhanced the film, instead they feel shoehorned in like cheap gags. I love his visual style, but I can see how it may seem quite jarring when compared with the other films.


I'm not saying that Alien 4 is a great Alien film, but I love it as a Jean-Pierre Jeunet movie, and when I watch it now I switch focus from the many flaws - to the brilliance.

If you've not watched Alien: Resurrection for a while, here are ten reasons to snuggle down and view it tonight, you might not like all of the things on this list, but they are worth watching...:

Early versions of the script had Newt as the main protagonist, but if you're going to bring someone back from the dead - then you may as well make it Ripley. She is pure, unfiltered badass in Alien IV - she's a human/alien hybrid so she's kinda got superpowers.

2. The visuals are superb.

This is a dark sci-fi universe and it looks amazing. The interiors in Alien IV make the Millennium Falcon look like the Axiom from Wall-E, I've waxed lyrical about Jeunet's work and shall do so again here; he often has rich pallet dominated by a particular colour, typically green or gold and his unique style often saturates the screen but not in a way which looks overly artificial. The ships aren't pretty, they look like floating industrial estates with metal grated floors and heavy doors.  I also cannot stress enough that this is NOT FULL OF CRAP CGI! Alien 3 had some embarrassingly poor CGI which looked worse than a second generation games console, Alien 4 does have some less than spectacular CGI but it is a major improvement on the third film. Most of the special effects are practical effects though, the vast majority of alien action (especially closeups) was achieved using hand crafted effects in the same vein as the first two movies.

There's a scene where a bunch of xenomorphs are confined to a cell. It undermines the power of the aliens because the last 3 Alien movies have gone to great effort to show that these beasts are a practically unstoppable force. It's a flaw in the film to be honest as the aliens just seem like confined creatures, and you see them more as wild animals rather than deadly life forms. However - their form of escape is rather cool. One of the xenomorphs is brutally atacked by the others, leaving it as a bloody, mushy mess on the floor. But as we know - their blood is incredibly corrosive and the resulting massive hole in the floor enables them to break free.

Let's not forget that the alien films are horror movies - and nobody is as horrified as Ripley when she sees her 'sisters'. Freakishly deformed human/alien-beings, some never stood a chance of life as they were simply too malformed, others left to cling to life and suffer the indignity of surviving as specimens in a laboratory. In one particularly poignant moment, a clone whose misshaped body has been further mutilated sorrowfully begs Ripley: "kill me".

Okay, everyone seems to know this (except me it seems, until I watched the Blu-Ray special features) but the scene in which Ripley throws the basketball behind her and it flawlessly lands through the hoop is not a special effect, it's a moment of genuine awesomeness which Sigourney Weaver insisted on doing for real. I told you she was badass.

Surely reason enough to watch a film! What makes this scene so great is that it's part of a bigger scene where Ron hooks his legs around a ladder and dangles up-side-down so he can fire bullets into the the head of an Xenomorph. Seemingly unfazed by the sequence, Perlman rights himself and comes face to face with an arachnid. Now, I don't condone the killing of spiders - but to scream at such a small harmless thing after blasting an acid-spitting beast adds some twisted humour.

I'm not a huge fan of action films full of guns (hence my comments about French new look cinema), but Jeunet makes them look cool. Close up shots with wide-angle lenses make for some dramatically framed shots. If you're a gun fan then this won't disappoint. Flame throwers, rifles, and slow-mo underwater gun fire - it's all in here.

It might not be quite as awesome as the "M577 Personnel Carrier" from Aliens (Batmobile on steroids) but the character Vriess (played by the magnificent Dominique Pinon) has a wheelchair which looks more like a moonlander. One thing I love about Vriess in the film is that he's a main character who happens to have a disability, rather than a disabled main character. He's a crucial member of the ensemble and the fact he is in a wheelchair is just one aspect of his being and not something which defines him.

The ginormous alien giving birth like a mammal divides audiences, but personally I love it. The thing is massive, and I mean HUGE! Just just look at the sheer size of that epic monster!!!! Whether you like the idea or not, there's no denying that the visual effect is incredible - you appreciate the scale and instead of looking like a cheap effect it looks completely convincing. It screams while in labour, a creature performing to her strange physiology and not to any natural instinct, and then gives birth to a........

Now the human/alien offspring is possibly the most divisive thing in the alien franchise. My wife (note, she was just a girlfriend in my earlier comments) hates the damn thing and sees it as an insult to the film series. I find it to be one of the creepiest and most unnerving things I've ever seen - and I watched Mamma Mia at the cinema, TWICE! After freeing itself from it's post natal membrane it kills mummy, roars, and then you notice it has human blinking eyes. It is an absolute abomination, hideous and scary but in a different way to the xenomorphs. It has an expressive face which is capable of looking ferocious and pathetically scared. I don't know anyone who likes this alien human hybrid - but personally I consider it the most disturbing alien in any of the films, and its final moment is harrowing. It screams for it's mother figure Ripley, and Ripley's anguish is palpable as she cries "I'm sorry". The poor ugly bastard doesn't know what it is! Gruesome and gory and quite creative, it's a superbly nasty finale!

So there you have it. Just because it's not the best Alien film doesn't mean it's a terrible film.

If you haven't watched it for some time because you recall it being a travesty of cinema - give it another go, you might even enjoy it!