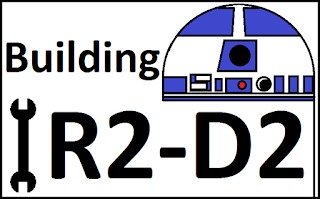 
This part covers the initial decisions I made for my build and the initial preparatory work before any cutting or building was required. At the end I will list the cost of materials and where I sourced them from.

This is intended as a follow-up to my video and contains some detail as to the actual processes I used. If you haven't seen the video yet, it's here:


When I decided to build an R2-D2 I didn’t really think much further than that, it was only when I looked at the options available that I realised I had to think about what I wanted to achieve in order to know where to begin. The initial stages of building an R2-D2 don’t involve any actual building at all, for me anyway. The first few weeks were spent doing/asking the following:


What materials do I want to use?


What do I want to achieve?


What do I build first?

If you look on Youtube there are some *amazing* R2-D2 builds, some are more functional than any which appeared in the films and have all the sections opening, various things popping out, and capable of moves I only thought possible with the use of CGI! However, for every amazing R2-D2 build – there are far more abandoned projects languishing in garages, and I had to decide what I realistically could achieve. So my aim is to build:

A 1:1 scale movie-realistic replica R2-D2 with a fully rotating dome containing all lights/logic displays and capable of producing realistic sound. The body will be motorised so that it is fully mobile. The unit will be remote controlled.

So that means it will look like R2-D2, sound like R2-D2 and will move like R2-D2 – but the panels on the dome won’t open and the body won’t have utility arms which extend. I also decided to start on the dome as I thought it would be easier to build a body to fit rather than vice-versa. I know this is 1:1 scale, but just in case something is slightly off I reckon the body would be easier to scale up or down. I also think that a completed dome would provide inspiration to complete the project as it is the most recognisable part of Artoo.

Initially I was going to use styrene (plastic) but was won over by the amazing aluminium domes. They cost more but look absolutely beautiful and more authentic in terms of the original film trilogy.

So I bought the dome and set to work on it. The dome itself comes in 4 parts. 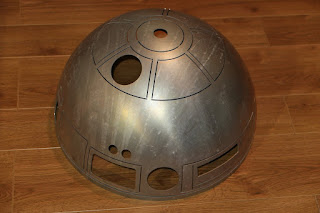 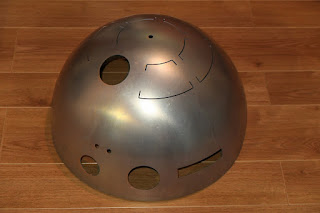 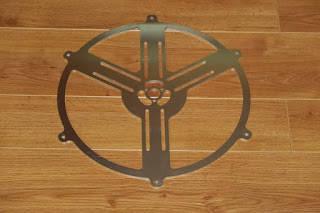 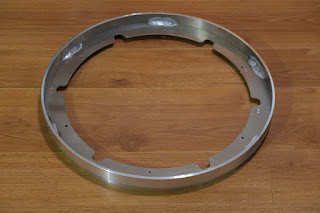 The inner dome is incredibly thick and very strong, the outer dome is also strong but has some give and little bit of flex tot if you apply a lot of pressure on the parts which are designed to be cut out. The outer dome is what will be visible and all the panels are pre-cut with only small tabs of aluminium left in order to hold them in place. This means only a minor amount of cutting will be required to remove them. 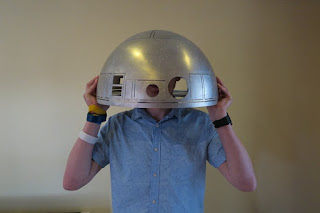 The first job is to sand the dome, well, both the domes. The inner dome doesn’t need a great finish as it won’t be visible, so I used it to experiment with sanding techniques before deciding on how to prepare the outer dome. I did sand the inside of the outer dome though as it had lots of sharp edges (burring) where the cuts had been made. Imagine piercing a jam jar lid with something sharp, the outside of the lid will be smooth but the inside will be jagged – it’s the same principle here. I sanding the inside using a coarse sanding sponge, it got rid of a lot of the rough areas but some of the jagged areas simply cut the sponge and shredded it! That’s not a major concern as when I come to cut the panels I’ll be filing them down.

The outer dome has a lot of water marks and uneven oxidisation initially. 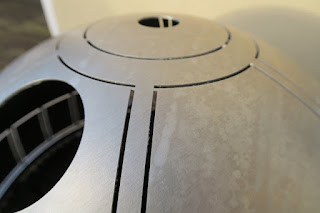 I wanted the dome to have a brushed steel kind of look, a satin finish which would look very metallic but wouldn’t get covered in fingerprints ( I have 5 children!). I spent about 5 hours sanding the dome, but the truth is that I wasted a lot of time and found myself changing techniques part way through. Based on what I know now – I reckon this stage should take no more than 3 - 4 hours. Here’s how I did it:

NOTE: To start with I sanded the inner dome, although this won't be visible - it enabled me to get a feel of how the metal reacts to the various sanding sponges. This is how I determined that the coarse sanding sponge would be too much for the outer dome. The inner dome was pretty smooth but there were one or two rough spots around the edges and giving it a bit of a going over got rid of any bits which might cause problems when the outer dome is finally placed over it, I need the fit to be snug.

Using a medium grain sanding sponge I used circular motions all over the dome to get a smooth finish all over. This removed any water marks and any blemishes (there weren’t many to start with).

After using the medium sponge I moved onto a fine grain sanding sponge. I tried both dry and wet sanding and found that the best results were from wet sanding to start with and then follow up with dry sanding. To wet sand, I simply dipped the sanding sponge in water every-so-often. This was incredibly effective, instead of creating dust, the particulate gathered on the sponge as a grainy sludge and it felt considerably more abrasive. It made sanding almost effortless as the sponge glided nicely over the surface of the dome. Again, I used circular motions to rub the aluminium and after half an hour or so I rinsed the dome off (tipped a bucket of water over it!) and was impressed with the results. The fine grain along with the material removed from the surface had effectively created a paste which removed the deeper scratches and helped to achieve a more polished finish. Once dried off however I could see the ‘swirly’ pattern left by the circular motion. I repeated the wet sanding (once again with a fine grain sponge) but this time I followed the horizontal circumference of the dome rather than rubbing in a circular motion. Half an hour of this and a quick rinse later revealed a finish closer to my end goal. There were still scratches but they were fairly light and all ‘ran with the grain’ of the metal.

Time to ditch the sanding sponges and go for steel wool. Using a fine steel wool I started rubbing the dome until a patch of paler metal was visible. Instead of shiny it was dull and almost white in colour. It took some effort to get this, and rather annoyingly I needed to get this finish over the rest of the dome which meant an hour of effort and very achy arms! The trick here is to rub at the edges of the paler patch and increase the boundaries of it, spreading it over the dome. I didn’t bother with the panels which would eventually be painted, instead I just focused on the metal which would be left exposed. I used quite a bit of wire wool here as it quickly disintegrates under strain. I wanted to maintain the horizontal grain, so I would use some circular motion but would always go back over it horizontally. By the time I had completed the entire dome it looked a different colour almost and the parts which hadn’t been treated with steel wool enables you to see the contrast in the finishes:

It was looking quite scratched at this stage and so the steel-wool rubbing had to continue to neutralise the scratches into a smooth finish. However now I wasn’t applying pressure to rub the surface away, instead I was rubbing very lightly with almost no effort. I was lightly following the curve of the dome (in a horizontal plane still) and frequently replacing the wire wool with a fresh piece. It didn’t take long before a shine started to appear and a brushed steel effect really started to establish itself.

Once the finish is looking pretty much free of scratches, it was time to polish. I used “Silvo” (from the same manufacturers of “Brasso”). It’s quite inexpensive and a bottle goes a long way. It’s very similar to Brasso but less abrasive and therefore more conducive to achieving the finish I want. I dabbed the Silvo onto steel wool (after shaking the bottle well) and rubbed it along that same horizontal plane. I have to stress at this stage that you only need to rub very lightly at this stage - you're not sanding now, just polishing ! Moments after rubbing, black streaks started to appear as a rather ugly residue. At this stage I felt I was taking a step backwards as the dome looked awful. 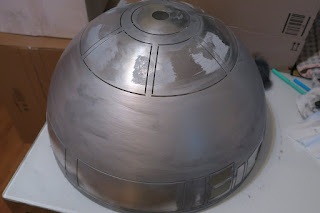 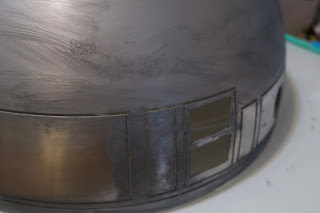 Because I’m a freakin’ hero I perservered and looked in horror as my nice shiny dome had become a mess! Continuing the horizontal strokes I kept going until the Silvo had dried (only a few minutes). To remove the Silvo I wiped the surface with wipes specifically designed for metal. To be honest any old wet-wipes might work but I didn’t want to take any chances. The wipes started to remove the black residue but the dome still didn’t look that great. I used about 25 wipes and gradually less and less residue came off until the wipes were coming away looking clean. 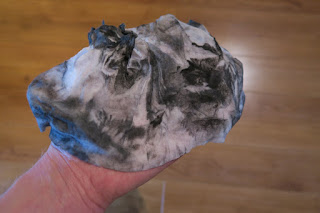 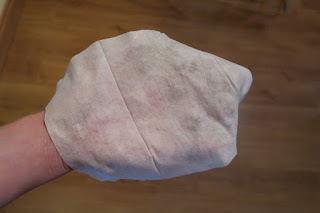 By this stage the dome was looking fantastic and the effect of the Silvo was apparent. The low-level of abrasion had polished the surface beautifully. I didn't wire wool the top "pie panels" so you can see the before and after difference below. The panels remain shiny (I'll be spray painting them soon so not bothered about a satin finish on those) but the main part of the dome which will be exposed and visible was given the full wire wool treatment. A quick buff with a dry cloth revealed a fantastic finish! 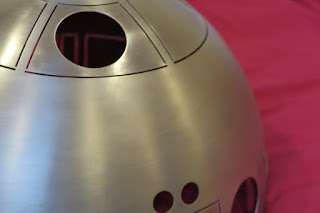 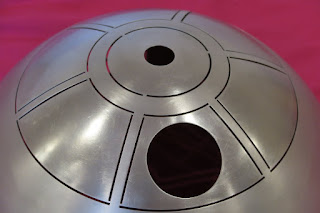 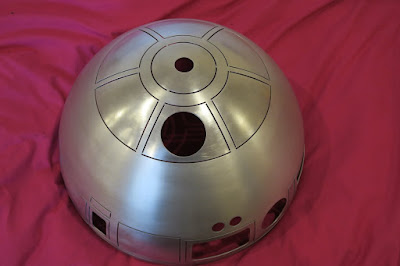 I actually made an error after getting the finish above, I decided to Silvo the dome again and rub quite harshly with wire wool, it ruined the finish and I had to repeat the process again (dry wire wool and then Silvo and wire wool) in order to go back to how it was before!

The steps above take about 3-4 hours and leave you with a fantastic finish.