A twenty year-long ambition to meet Captain Kirk in the flesh was realised this weekend, it was a milestone moment mixed in with a series of incredible panels and guests – but the standout moment of the event (for me) came from an-off topic question which resulted in tears and a standing ovation. It was a weekend of pointy ears, redshirts and photo opportunities, it was a gathering of pop-culture and nerdgasms, it was, in short: amazing. And the first thing to greet you when you got there were the iconic TNG and TOS bridges. 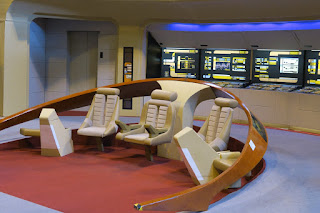 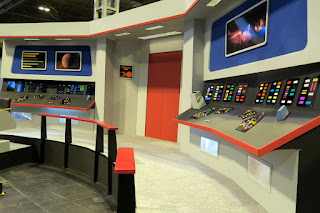 It’s fair to say that Star Trek fandom is unlike any other fandom. Star Trek has never just been about battles, and romance, and alien life forms – it‘s not just a franchise, it’s a philosophy and one which has helped to shape an entire global community and inspire actual real-life innovations. The Destination Star Trek: Europe event was the UK based leg of the Golden Anniversary convention and one which epitomised Roddenberry’s vision.

The Cosplay examples ranged from off-the-shelf t-shirts to full uniforms and elaborate costumes which must have taken hours to create – and hours to put on. There were males dressed in female clothing, some simply for giggles, and some because it was a chance to express their true-selves in a safe environment without prejudice. If ever the world needed an example of a community based on acceptance then the NEC Arena across the second weekend of October was a fine example (I’m referring to the Star Trek event, I don’t think the Horse Of The Year Show in the neighbouring block has a strong Cosplay scene).

Normally queuing would be a dull activity, a waste of our precious time here on Earth – but not at Destination Star Trek, it was a chance to speak to those who had made their own ‘trek’ to the arena, compliment nasal prosthetics and compare squeaking Tribbles. For those attending all three days, a combined queue time over ten hours was typical after factoring in guest talks, photo shoots and queuing for the bar.

The opening ceremony was hosted by Greg Grunberg of Heroes fame (I never watched Heroes) though also known for his recent roles in both Star Trek Beyond and Star Wars: Episode VII. I’m not familiar with Greg but his love for the franchise and natural comedy banter made him the perfect host, this might have been an event for Trekkies, but anyone who has flown an X-Wing on the big screen commands respect from ANY sci-fi fan!

Greg warmed up the audience of the main (Enterprise) Stage and introduced many of the big names from the event who walked onstage to frenzied applause! The old guard such as Shatner, Koenig and Takei along with Chris Lloyd showed their faces with great reverence while TNG onwards cast members had a laugh and engaged more with the crowd. 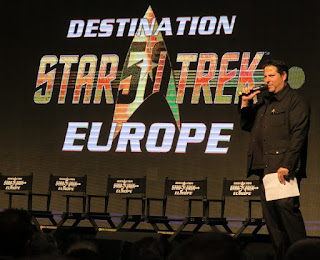 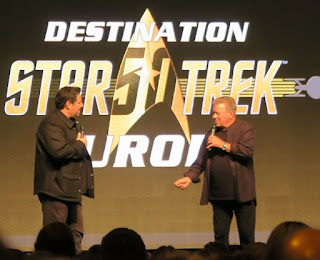 The following two days were full of panels, all were insightful and crammed with anecdotes which I hope have been well documented as they add to the rich history of Star Trek. One of the early panels (All hail the 50 year march of the Klingons) was particularly poignant and Terry Farrell stole the hour – not an easy task when sat alongside a loud Klingon (the fantastic Robert O'Reilly as Gowron). A question from an audience member who seemed to take Terry’s absence from the show after Season 6 quite personally wanted to know why she left (she was his favourite character and he wasn’t shy in admitting that her wedding scene made him emotional). Her response was beautifully candid, she explained that her “take it or leave it” contract renewal seemed unfair and after trying to renegotiate terms she was treated quite badly. Rick Berman’s side of the story wasn’t presented, but it’s clear that she was made to feel unworthy and was unfairly treated (frankly, it was bullying). After revealing that she has never watched season 7 as she can’t bear to view the show without her Jadzia Dax in it, she wept on stage – it’s something which continues to upset her. Star Trek fans are pretty amazing folk – the biggest standing ovation of the entire weekend was for Terry Farrell who was embraced with applause and one of the most engaging of the guests, featuring highly in ‘queue chatter’ from that moment onwards. She was dignified and honest, the Trill from DS9 became the surprise star of the weekend, and she was absolutely worthy of it. 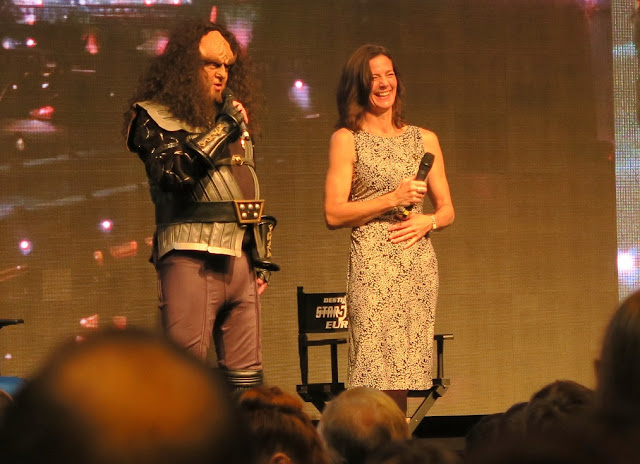 Between panels, attendees could crash down in the chill zone – massive cushions were provided while classic 'Trek episodes were shown on a large screen. Star Trek themed artwork and props were on display along with fan group stands and of course, merchandise stalls. CBS had a free (yes, *free*!) photographic opportunity to get 'beamed' (in conjunction with Starburst Magazine) and fan group "Trekkie Girls" were knocking about too. The Trekkie Girls were pretty impressive, they played an active part in panels and really showcased female fandom of the franchise. My Daughter has just started to get into Star Trek and it's great to know that's there's a strong 'Trek Girl group she can identify with which is about true fandom rather than just concerning tiny dresses! (Visit their Facebook page here: click!)

Special mention has to go to the USS Ranger Sci-Fi & Fantasy Fan Club who had an excellent Data cosplayer as their mascot – their Facebook page is well worth a view click HERE! They have plenty of great photos from the event, be sure to check it out. 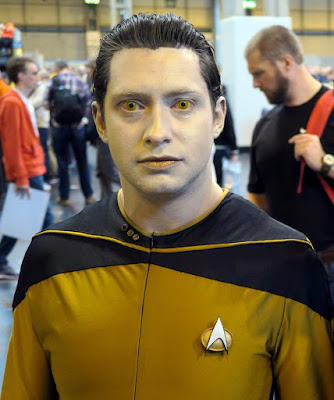 Over the three days I had no time to chill on the cushions – my friends and I attended as many panels across the stages as we could, each one was insightful and most were entertaining. Garret Wang excelled at moderating panels, even when he wasn’t an official moderator. His great sense of humour and spot on George Takei impression were certainly appreciated!

I won’t document all the titbits and anecdotes here as I’m sure that others will have recorded them better than I, however one which I felt particularly privileged to hear was from Walter Koenig who requested to go along to the filming of the DS9 epsiode Trials and Tribble-ations which was set during ‘his’ TOS era. After watching two cast member struggling to flip open the classic communicators (they kept bouncing shut after being flipped open) he casually emerged from the shadows, took one and flawlessly flipped it open. After saying “That’s how you do it” and realising how cool the moment was, he simply turned and cockily walked off grinning!

Adam "Son of Spock" Nimoy was very visible at Destination Star Trek. His "For the Love of Spock" presentation was a highlight was available twice over weekend. It was a chance to see some of the background work which went into the documentary about Leonard Nimoy, a project which was started by Adam and his father back in 2014. Adam was eminently approachable and more than happy to greet fans as he roamed the exhibition centre. Entertainment extended after the main show too, especially on the Saturday when the Star Trek Rat Pack featuring Armin Shimerman and Max Grodenchik alongside  Jeffrey Combs, Casey Biggs and Vaughn Armstrong performed on stage. Kudos to Max as he wrote many of the Star Trek themed songs, and Jeffrey was a born entertainer – his Shatner impression was incredible.

This isn’t a full write up of the weekend, there are in-depth blogs and YouTube videos doing that – this is just an insight into an event which meant a lot me and I enjoyed immensely. Having watched Star Trek so much in my early teens I never thought I would watch William Shatner talking about the time Coco the Gorilla grabbed his knackers, see Wil Wheaton sat on the bridge of the Enterprise, or shake hands with the son of Leonard Nimoy - there were several times I looked over at my Trekkie friends and laughed at how awesomely surreal it all was!

While I was there I took the opportunity to seat in the Captain’s seat... 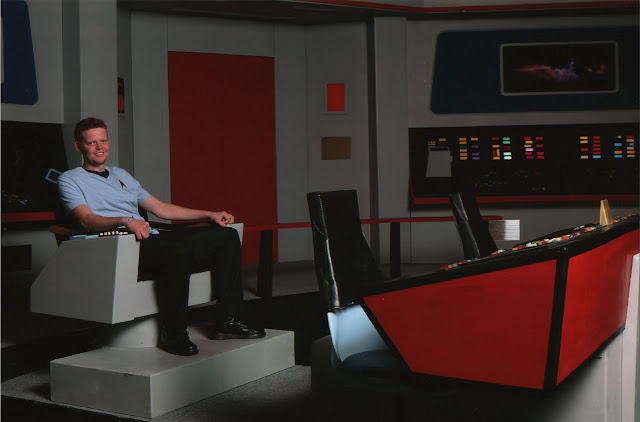 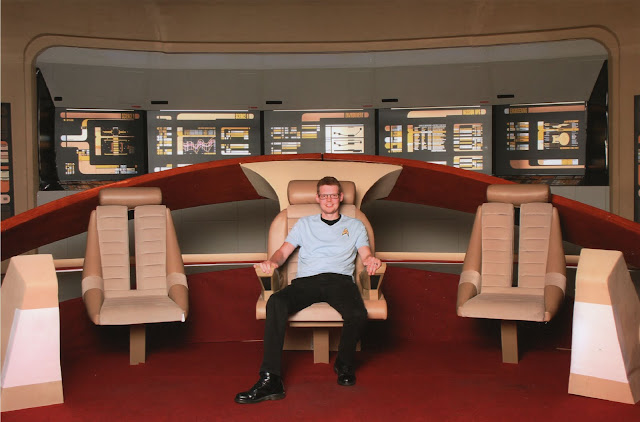 And I owed it to my teenage self to take advantage of the chance to get up close and personal with particular cast members. 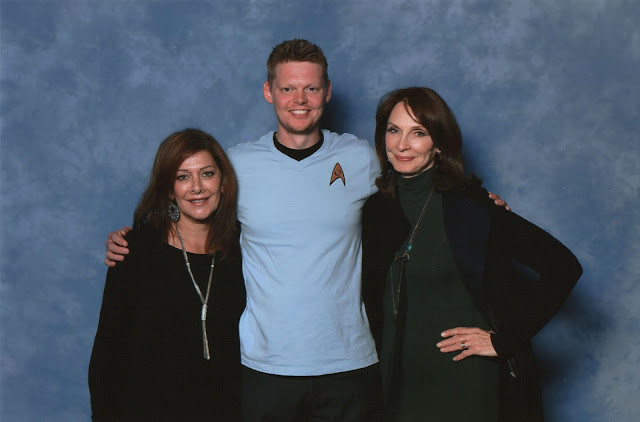 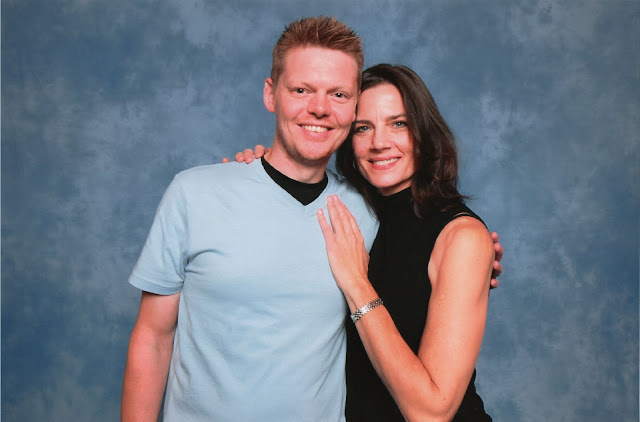 I started out the weekend with the aim of fulfilling the dream of meeting captain Kirk and I made the 12 year old me proud by doing just that. 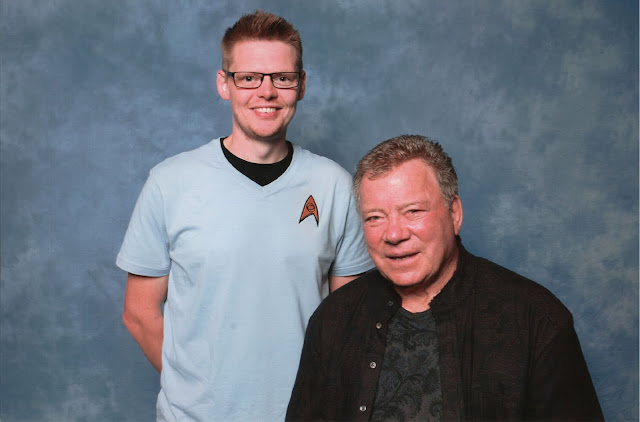 I guess Star Trek shaped my beliefs. It might sound crazy – but if I’d not have become so obsessed about a show which celebrated all life and civilisations, a show which took real life issues and projected them into a future where we could see them explored, then maybe I wouldn’t be the liberal, tolerant person I am today. I’d like to think I would have been. But looking around the exhibition centre and seeing the unique members of this special collective flashing Vulcan salutes, I felt proud to be a part of it all.