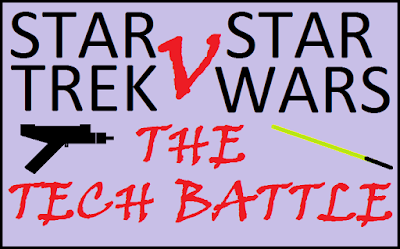 Star Trek versus Star Wars - it's one of the ultimate questions in genre entertainment. Friendships have been tested and marriages have ended over this philosophical battle (probably). Cult Kingdom dodges the question by asking a slightly different one: Who has the best tech?

Here are 15 bits of tech, some are specific items, some are collections. Some are unique to a particular universe and some are solutions to sci-fi problems which have been adopted by both universes. Sometimes better realised by one than the other - but one side has to reign supreme!

"Tea, Earl Grey. Hot!" - all Trekkies have said this at some point whenever Earl Grey tea has been mentioned. But just imagine saying those famous words and being presented almost instantly with a cup of steaming tea. Amazing, isn't it? Replicators are one of those life-enhancing, sci-fi technologies we hope will be available to us one day.  It's so good that Willy Wonka tried it himself.

Not the most practical of weapons - but easily the coolest weapon there is. Actually, it's the coolest piece of tech in this list. They look amazing, they sound amazing, and at the age of 35 I am the proud owner of one which I occasionally play with. (In case you were wondering, it's blue - Obi-Wan is my favourite Star Wars character.) When I walk past the toy light sabers in a shop I always pick one off the shelf, flick the blade out and make the sound effects using my own vocal 'talents' - it's impossible not to.


According to Douglas Adams' Hitchhikers Guide to the Galaxy: "Space is big. Really big. You just won't believe how vastly, hugely, mind-bogglingly big it is." Without faster-than-light travel the Enterprise wouldn't be able to visit strange, new worlds and the Millennium Falcon would be more like the Millennium Budgerigar. Star Wars actually has the more powerful technology here as the Hyper Drive seems quicker than Warp Drive speeds - but both result in the same streaming starlight effect and make the universe a much smaller place. Though a bit slower, Warp Speed (Star Trek) has the cerebral advantage of existing within what we know of physics, it bends space (hence "warp" speed) so is more about fancy physics than simple propulsion. Either way, this is a draw - both franchises are capable of whizzing to worlds within hours rather than years.

Apart from some personal cloaking devices used once or twice in Star Wars, this is fairly unique to Star Trek. It's an amazing bit of defensive tech which enables a ship to appear invisible to the eye and to scanners. The federation has come a cropper many times when a ship has decloaked from nowhere, but they finally had a cloaking ship of their own when the USS Defiant was introduced. Interestingly, this is a technology which is being made a reality in our own world as the military work to create surfaces which emit the light hitting them from behind - effectively making a solid object appear transparent.

Both 'Wars and 'Trek have shielding technology able to deflect weapons and asteroids. When travelling at incredible speeds, these are essential. Even a small piece of rock or space-junk could make quite a mess of a space vessel when you consider the energy involved at the point of collision. Whether protecting space ships or settlements, shields are an important part of both universes.

A cross between a prison and a cryogenic chamber, the Carbonite Block enables an organic being to effectively be 'frozen', rendering them harmless and transportable. Even better - it floats! Once encased in carbonite, your prisoner can be pushed along with ease. An easy win for Star Wars!

When you think Holograms in 'Wars or 'Trek, you think about the holographic messages in Star Wars - especially the recording made by Leia for Obi-Wan and left in the R2 unit ("help me, Obi-Wan!"). It's certainly the most iconic - but it's not the best. My Ultra-HD 4K TV makes those holographic recordings look like the first shoddy videos ever hosted by YouTube. In contrast, Star Trek has realistic holographic images which look just like real life. The holodeck is a recreational area which can be used to live out any fantasy - and on Deep Space Nine, Quark has a holosuite for adult entertainment. Holograms in Star Trek are one of the most exciting things in the Star Trek universe, even if sometimes they do go wrong and put an entire ship in jeopardy!

Yes, Star Trek has some pretty cool androids and Data was one of the greatest characters in the entire shows history. But in Star Wars androids are commonplace, even the inhabitants of the dusty Tatooine plains have droids to help them. They are a ubiquitous technology which people expect to have. Sometimes they malfunction - but hey, even Data had an evil brother (Lore).

Imagine having a device which could fit in your hand and provide you with information at the touch of a button! Okay, it doesn't seem that great now that smartphones are given out like sweets. However, the Tricorder is an incredible bit of kit which enables the user to scan areas or organisms, view data, diagnose issues and record findings. On scouting missions it is an essential item to have and has been around since the original TV series.

Different alien cultures have different languages. The language barrier is second only to distance (as dealt with under "faster-than-light travel"). Star Wars has the best 'droids, we've already established that, and they are used to deal with language issues with the likes of C3PO being "fluent in over six million forms of communication". Star Trek has something magical though - a piece of technology which analyses the communications of a species and translates it into understandable speech for the listener. All this is done in real-time and means that 2 beings with completely different languages can speak and comprehend each other! ...The TARDIS does something similar!

The tricorder can be used as a medical device and is a powerful tool, however Star Trek has other amazing medical tech which can be used to save and enhance life. From EMH programmes (Emergency Medical Holograms) which can perform complex procedures to hyposprays which can inject medication without breaking the skin - a federation space-ship is a treasure-trove of dazzlingly impressive medical gadgets. I often read about attempts to create hyposprays for use in real life, I don't think we're there yet - but surely one day we'll have no need for needles. Star Wars has some funky tech too, but it tends to involve replacing limbs with mechanical ones (Darth Vader was "more machine now, than man"), I'm sure Doctor McCoy would look at Star Wars medical practices with the same disdain he viewed 1980s Earth hospital tech (in Star Trek IV: The Voyage Home, he compared it to the "dark ages").

Storm Troopers are a lousy shot - they miss their target more often than they hit it, but that's probably a good thing or else the main ensemble wouldn't have made it through to Episode VI. The guns are a great design which often look quite real and very menacing. "Blaster rifle" sounds so much more cool than "phaser" - however this is a draw as the good old phaser has a stun setting. You don't always want to kill your assailant - just render them easy to pick up and throw in the brig.

Flying through space is all well and good, but sometimes you want to travel over the surface of a planet rather than past it. In Star Trek: Nemesis we saw the "Argo" - a sand buggy which bounced around the dunes of Kolarus after being driven out of the Enterprise's shuttlebay doors. Picard seems to enjoy experience and to be fair - it does look like a lot of fun! But....
...the Imperial Speeder Bikes used by the Scout Troopers in Episode VI are the ultimate in fun outdoor vehicles - unless you hit a tree while whizzing through the forests of Endor, and watch out for Ewoks!  Star Wars has quite a selection of land vehicles, be they massive transporters, four-legged AT-ATs or the bi-pedal AT-ST (my personal favourite - but only because I had a toy one as a kid) - each is iconic in design and helps to enrich an already incredible universe.

The transporter allowed Star Trek to run at a quick pace, instead of sending shuttles down or having to dock spacecraft, they could beam crew directly to where they were required. Similar to a replicator which reassembles particles at a sub-atomic level, the transporter disintegrates 'passengers' and puts them back together in-situ. Strict limitations prevent abuse (you can't assemble an army by rigging a transporter to transport one person and duplicate clones at the other end).

The ships in Star Wars are cool in a cyber-punk kinda way. They aren't gleaming white surfaces designed for comfortable living with talking computers, turbo lifts and large medical bays. They are craft which require tinkering with, piloting properly - not tapping away on a screen. They are dirty and beautiful and lend a realism to a fantastical space opera. But this is a battle of tech, and with that in mind, Star Trek trumps Star Wars. Look at the later Enterprises - most of the fab tech mentioned above is standard issue there. It's like a luxury liner, the Captain doesn't frantically flick switches and wrestle the Enterprise in the right direction using a joystick, instead he sits on a comfy leather chair points his finger and says "engage". Each Starfleet vessel is a collection of incredible tech. The Death Star didn't even have recycling facilities.

This doesn't prove that Roddenberry's vision is better than Lucas' creation. It's just that Star Trek exists in a universe which has better tech. if you were to live in the Star Trek universe you can expect (assuming you're in Starfleet) to have technology which is life enhancing in all areas: Had an accident? A holographic doctor skilled in numerous surgical techniques can help you. Late for a meeting? Just beam there in seconds! Single? Visit Quark's and have several green-skinned Orions tend to your every need.

Star Trek tech is way better - so much so that real effort is made to mirror some of that technology in real life. But that's not a failing for Star Wars, within its own universe the tech is perfect and complements the tone of the narrative and the cobbled together, well used tech has a unique look to it. Star Trek tech may blow Star Wars tech away like a photon torpedo hitting a meteor, but you've got to admit, there's still nothing cooler than a light saber.