Gojira (1954) was a huge success. Toho had to capitalise on this and immediately started on this sequel which still featured Takashi Shimura (as scientist Kyohei Yamane). Less than six months after Gojira was released, Gojira no Gyakushū hit the screens. As with the first film, it was re-edited to please the American market, but not as a Godzilla film (Gigantis, the Fire Monster), but here I am looking at the original Japanese movie. 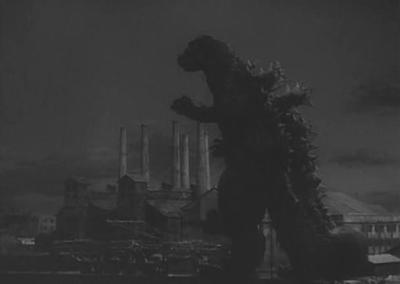 Godzilla Raids Again opens with a Godzilla roar but not the familiar Ifukube theme. Although to be fair, this was only the second film and therefore wasn’t that familiar at this stage. We do hear two distinct roars though, the second belonging to another Kaiju, Godzilla dueling with another monster would be a familiar template for the film series. The creative team behind this second outing is slightly different with Motoyashi Odo keeping the director's chair warm and Masaru Sato creating the soundtrack. Although Ifukube's scores are generally accepted as the de-facto sound of Godzilla, Odo's music works well and is not second rate even if it does occasionally sound like a generic ‘50s film score. Raids Again continues the visual creativity of the first film thanks to Eiji Tsubaraya's special effects work. There seems to be less for Tsubaraya to do in this film, but his work stands out and adds plausibility to a film which sounds so laughably bonkers by seamlessly moving from live action to model work. 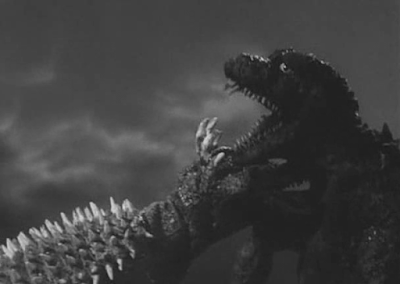 It's been a few years since I watched this film, and I didn't realise how little Godzilla appears. He is a prominent figure in the film but actual screentime is more dedicated to the discussion around him and in developing the human story which throws drama into the mix and ultimately builds to a poignant moment during the films finale. The film opens with two pilot friends who find themselves observing a monster brawl between Godzilla and an unidentified Kaiju after one of them crashes their plane. Once reported, familiar face Kyohei Yamane flicks though his book of giant ancient reptiles in an attempt to get to the bottom of the melee.

Gojira may not exactly have been "hard sci-fi" but the science seems more flexible here with ideas quickly introduced and then accepted to be fact without any real questioning or further investigation. The best example being the explanation of Angilas originating from the mutated dinosaur angilosaurus which, apparently, back in prehistoric times hated predators, hence the sparring with Godzilla now. The pilot’s identification of the beast along with a dinosaur encyclopedia definition is enough to confirm exactly what they have here with no reason to pursue any further hypotheses. You may recall that Godzilla was killed in the first film along with any chance of recreating the Oxygen Destroyer weapon which saw him dissolve down to the skeleton, Yamane is sure that this is a different Godzilla, the product of the same radioactive circumstances. As a Godzilla fan though I like to think that this is the same Godzilla and that his regenerative qualities are far better than we realised!

Having two monsters and no way of killing Godzilla means that this film naturally explores other avenues, it can’t simply repeat the winning formula of the first film. We even get to see some of the first film when Yamane plays footage of the original Tokyo attack, it’s quite a surreal moment seeing a group of suits sat around watching Gojira! Using the lessons learnt from Tokyo, they decide that the best option to deal with an unstoppable force is to lure Godzilla away using light.

Speaking of the monsters – Godzilla has undergone something of a change – not a radical redesign but the head is a tad more squat though he still has ears. The teeth seem to protrude outwards more and he is slimmer around the waist. I don’t know for sure but I’d hazard a guess that the slimmer waist and thighs were ways of giving Godzilla more freedom of movement when fighting.

Angilas is (literally) a very different beast, a quadruped, covered in spikes, and no atomic breath. He looks almost cartoony in the face and both monsters seem to have personality – Godzilla, because of his reactions and Angilas because of his relatively cute roar and the little spinny head thing he does when being tormented.

Fighting is frenzied and fast, not slow and cumbersome. They scrap like animals with feet clawing at their foe as they drag each other to the ground. Godzilla is the supreme fighter and at times you feel sorry for poor Angilas as he emits squeaky roars while being bitten by his stronger nemesis. At one stage, Angilas is pushed through a building and tries to run away from Godzilla only to be caught and have his neck bitten. Blood trickles down Angilas’ lifeless body which then slides unceremoniously into the water. Godzilla sets fire to his corpse with his radioactive breath. This is brutal stuff. Convention is defied by having the big showdown halfway through the film rather than being the sensation at the end, this cements the film as a Godzilla film and not a “Godzilla Versus” move, the Big G is the star here and not even a giant spiny monster can survive through to the final act.

The scope of the destruction in the fight is impressive, not just the actual amount – but the detail. I actually recognised Osaka Castle on TV once because I remembered it from this film. The recreation of a famous landmark was ambitious but perfectly executed. The moment the two come crashing through it is one of my favourite shots of the entire film, and possibly one of my favourite Godzilla moments ever. 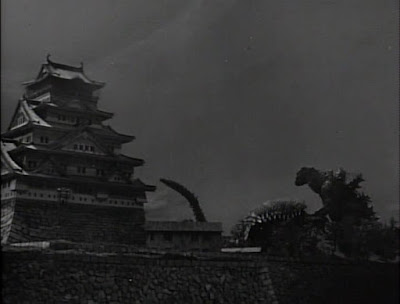 Some stock footage is used, but the miniatures are what really impress – there’s one scene I had to re-watch several times to because it’s so well crafted: A bunch of escaped criminals steal a car only to end up crashing it and causing an explosion, the transition of the scene to models from the live action car chase is so natural that you can hardly tell it is a model. As cities burn and buildings crumble, we get interior and exterior views, and those escaped convicts I just mentioned allow us to experience the danger close up as they run through the streets during a Kaiju stomp. The aeroplanes in Gojira worked okay but the strings were obvious and scenes were repeated, although there seemed to be some repetition here, the actual plane sequences were an improvement on what we’d seen before. Kudos to the rubber-clad Haruo Nakajima by the way – in some scenes where projectiles are being fired at Godzilla, you can see them hitting into him and flames over the surface of the suit!

The spectre of war looms over this feature. There are mass evacuations and citywide blackouts, scenes of evacuees running and carrying as many belongings as they can hold, could come straight from a Pathe war film and must have resonated strongly with the Japanese public. Fear of atomic weaponry is expressed and even the unthinkable is suggested – using Hydrogen bombs against Godzilla. That fact that this suggestion is laced with a kind of guilt rather than bravado shows both the real word attitudes towards nuclear weapons and the fear of Godzilla in this fictional universe. This familiarity of war tinges the film with a terror the Godzilla series would never achieve again after the first two films. It would be a few years for the next Godzilla movie (King Kong Vs Godzilla) and the focus would switch to pure entertainment rather than horror with a social commentary. Also, the first two films are the only black and white Godzilla movies, so they partner each other well in both theme and aesthetic. I can imagine that both Gojira and this sequel were breathtaking spectaculars in the mid-fifties, sixty years on they still look great.

Complements the first film well. Not quite achieving the same level of fear and not utilising the post-war politics as well as Gojira, but still a 'serious' film which doesn't ever feel silly despite featuring two giant monsters. Introduces not only the idea of other Kaiju, but also that they they can differ in design - no flying beasts, size changing robots or buzz-saws yet though! 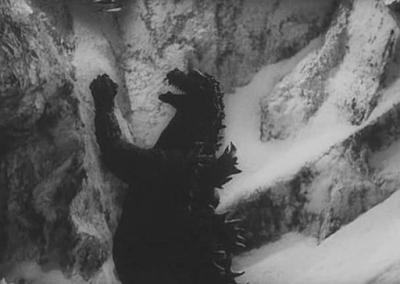