This is one of four Godzilla films I watched regularly as a kid, as I’ve grown up I’ve read harsh criticism of Son Of Godzilla. I remember it being a fun film with a cute little Godzilla who could only blow smoke rings instead of atomic breath. That cute mini-zilla has been panned as the most annoying thing to happen to Godzilla in the entire film franchise, and the Godzilla suit is said to be the most ugly of them all. So it’s with some trepidation that I delve into the deep and enjoy (or should that be endure?) the eighth Godzilla Movie. This is the second of the “island” films – set away from an expensive-to-build model city, the budget has been squeezed but thankfully the Godzilla films don’t look too cheap yet. It’s not a gem in the Toho crown however… 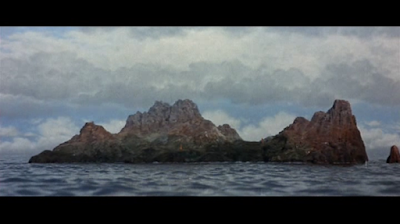 …An aeroplane struggles to fly during stormy weather. Something is interfering with the flight equipment – within seconds they see Godzilla raise his head from the ocean! 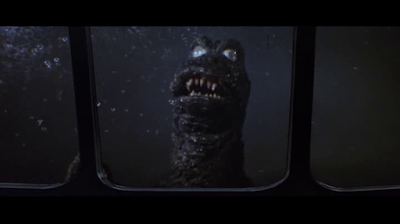 Pretty soon the crew work out that the interference is coming from a Solgel Island – a small, non-descript island in the south west, and Godzilla is heading there. The island is home to a UN organised weather science station, the scientists there have to put up with giant praying mantises – and a journalist hungry for a story. Oh, and as always, there’s an exotic native girl.

The UN science station has been built to facilitate an important experiment to terraform land into fertile land so that a future larger human population can produce more food.  It’s all very secretive as in the wrong hands it could be a powerful weapon. It’s very much like the Genesis Bomb from Star trek II: The Wrath of Khan! Unfortunately a rogue explosion causes a nuclear explosion which leaves the island inhabitable for several months, after waiting inside the base all that time, it’s finally safe for the scientists to go outside and inspect the damage, it looks like those giant praying mantises have become even more giant – they have become “Gimantis!” (in the American dub anyway). 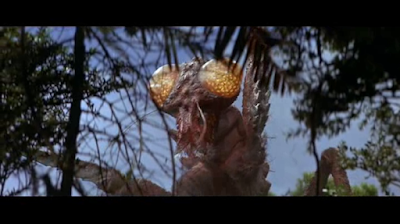 The Gimantis seem interested in a mound of earth they dig up using their legs and pincers. They unearth an egg and crack it open, once a baby Godzilla emerges they continue their assault on the chubby reptile. 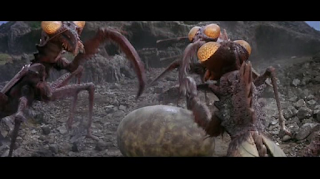 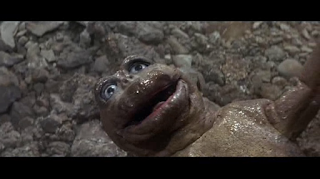 The cries however attract the full size Godzilla, speeding out of the ocean he rescues the young. 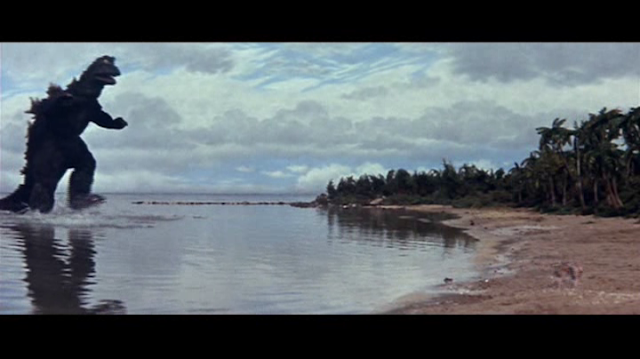 The film essentially follows two story threads; the humans trying to survive on such an inhabitable island, and the baby Godzilla being tutored by the full size thing. Godzilla’s parental skills are questionable. Yes, he comes and rescues the baby from the Gimantises, but he drags the poor thing by its tail, accidentally whacks it with his own tail and later stands on it. I never really saw Minilla as Godzilla’s own actual offspring, but rather a juvenile who just happens to be of the same species – hence Godzilla’s defence of it, but not really ‘connecting’ emotionally. It’s tough love with Godzilla shoving, tail stamping and threatening to hit the little bastard! He shows praise too by rubbing his head. 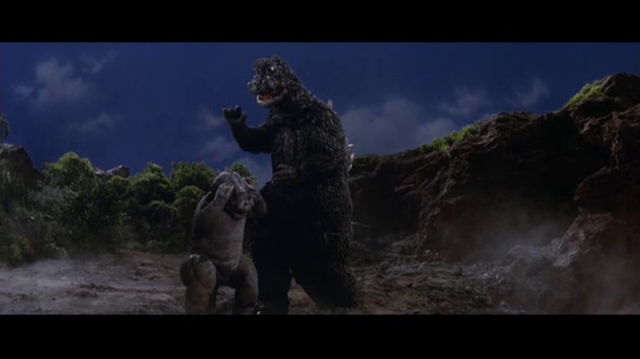 Right, I guess the two main issues with this film are the Godzilla suit, and the baby Godzilla. So let’s look at that suit. The main problem is the head, it’s pretty damn hideous. So far we’ve seen a few Godzilla designs and although they are all different, they all match thematically – changing some aspects but remaining unquestionably Godzilla. If you look at the entire body, this is clearly Godzilla but just by seeing the head, this looks like a cheap Godzilla knock-off or a fan-made suit for a convention. The eyes are very high up and the overall shape is not pleasant at all. Those eyes are now cartoony black-and-white rather than the more realistic eyes we had in the last couple of films, the jaw looks very mechanical, you can see where it hinges. 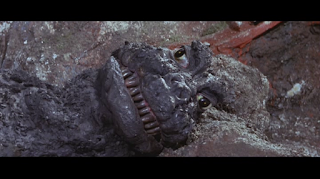 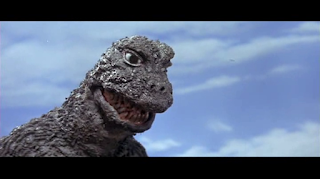 The neck is short and stubby, he’s more human-shaped which essentially makes it more obviously a man in a suit. 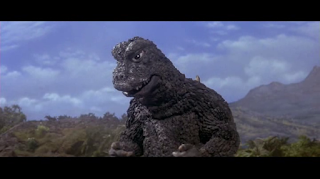 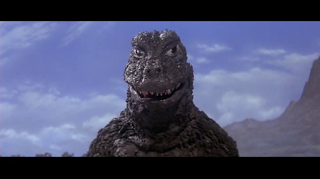 The body is poor, maybe not as bad as some internet communities make out. If the head was better. We’d probably forgive it the dorsal spikes which aren’t that spikey, they are smoothed off and rather small. This is not a very imposing design at all and lacks any of the fierceness we’ve come to expect. From behind it looks rather good, the legs look chunky and the tail is nicely segmented. 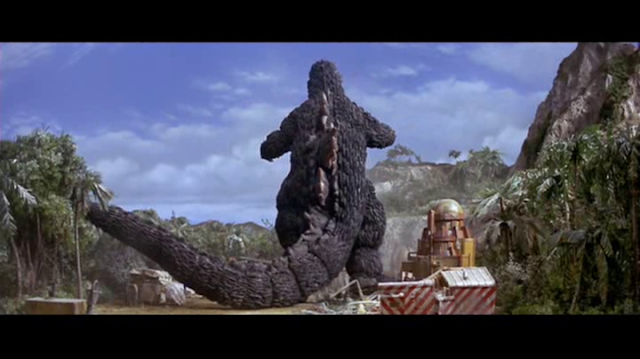 But from all other angles it looks like textured sack with a Godzilla head plonked on top. 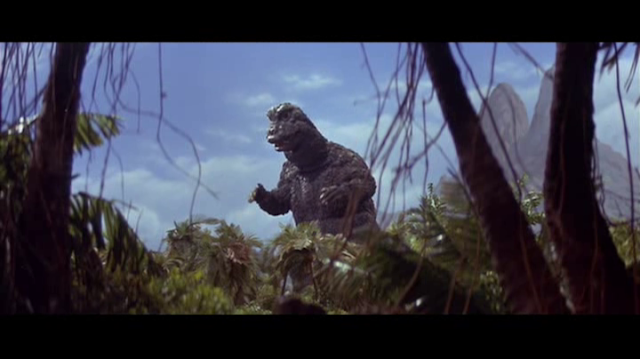 The suit does seem to allow for good movement though so in the few scenes where he does actually fight, instead of kicking rocks he is able to grapple with the island’s beasts. 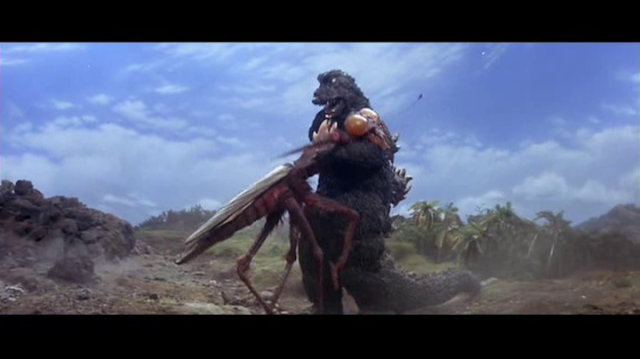 I find it difficult to decide if I like baby Godzilla or not. It’s not instantly endearing with the spongy body. It doesn’t look like a quality suit and it doesn’t really look like Godzilla – in fact, it looks *nothing* like Godzilla! From the front it is ugly, especially the newly hatched version. 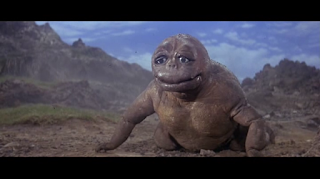 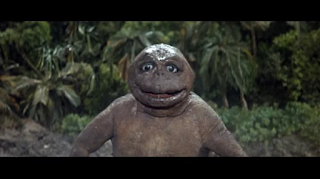 But from an angle it does look quite cute once it’s grown up a bit! 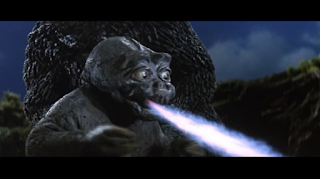 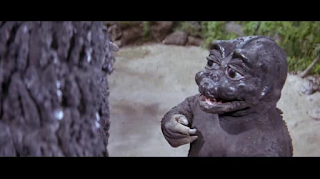 He might be a bit annoying but at times he does genuinely behave like a child. It begins by crawling and then playing, often falling over and being clumsy! There are some comedy moments such as when Minilla jumps over Godzilla’s tail while he is trying to sleep (rousing the beast from slumber only for him to close his eyes and go back to sleep – I’m sure most parents can relate to that!). He is very humanlike with his behaviour, and so is Godzilla. They lay down to sleep, communication seems very gesture driven.

The film does get some things very right though, such as the Kamacuras. The giant Praying Mantis creatures (actually the second lot, the first giant mantises are just a bit taller than a man, the second lot are huge!) look terrifying. I’ll actually use the American dubbed name “Gimantis” as it sounds funkier than “Kamacura” – anyway, the Gimantis are operated by strings rather than a guy in a suit and therefore they have a unique look and movement to them. I love the way they walk and when they rear up in a threatening manner they are very imposing, the claws look lethal! Instead of having a Kaiju-type personality, these are just massive insects and continue to behave like insects – but their pray is now much larger and their strength more obvious. 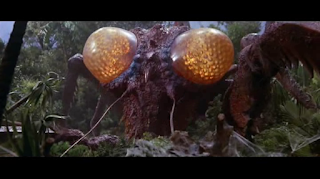 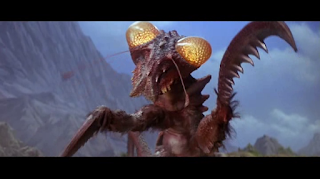 An equally scary creature is the Kumonga – a giant spider. Arachnophobes will look away from the screen at the impressively realistic way the Kumonga moves. It isn’t in the film for much but it makes quite a visual impact. 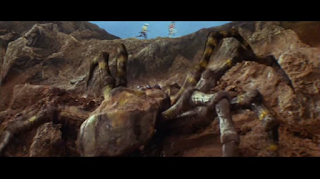 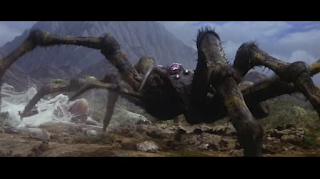 In terms of visual effects, the fighting scenes aren’t bad but they’re also nothing special. As this is an island there are no cities, but the weather station looks okay. It’s nowhere near as good as the alien base we saw in Astro Monster and not as impressive as the Red Bamboo base in the last film, but the many opening towers which release weather balloons do have a Tracy Island vibe and I half expected to see Thunderbird 1 launch! There’s very little destruction here and you can see how money has been saved. Masuro Sato provides the score again and this “Next Generation” don’t seem to be able to capture the magic like Honda/Tsuburaya/Ifukube did. Even the inclusion of a celebrated Toho and Godzilla actor doesn’t inject much needed oomph.

The Godzilla design seemed to strike a perfect balance in the Mothra V Godzilla (1964) before taking a step in the wrong direction for Invasion of Astro-Monster (1965). But in 1967 we end up with what looks like a second-rate imitation suit. It’s a shame that a film which boasts both Godzilla and a baby Godzilla has them both looking pretty shabby.  This is the worse Godzilla film up until this point but it’s still watchable and occasionally enjoyable. This is quite a divisive film, those who like the comedy and relationship of Baby Godzilla and Big Godzilla will really love the film, those wanting a bit of drama or a more serious Kaiju film will despair. As a kid I loved this film, now I’m 35 I appreciate it but also recognise that the direction the films are going in mean that the sombre more mature themes we saw back in ’54 are gone – for a while at least. This would just get 2 out of 5, but the quality hasn’t yet completely slipped and Son Of Godzilla did deliver two fantastic creatures in the form of giant Praying Mantises and a giant Spider, they may not have the ability to spit lightening but they are probably two of the scariest creatures in the whole franchise – possibly because they tap into existing creepy crawly fears.