It's hard to underestimate the cultural significance of a film which went on to inspire 27 sequels (with another due out next year), 2 American re-imaginings, a mainstream cartoon, several fan made productions plus the celebrated animated short 'Bambi Meets Godzilla'. Godzilla is a household name across the world and despite his many different incarnations still manages to be incredibly recognisable. Although many of the sequels are far from great and the reputation of the franchise outside of the fan-world is one which isn't taken seriously, the original 1954 film is a piece of serious cinema dark in tone, and politically loaded.

When watching the 1954 Gojira, it's important to consider the zeitgeist - this was released only nine years after the atomic blasts in Japan which catalysed the end of World War II. American occupation of Japan ended only in 1952, until this time the media was controlled and stark images of H-bomb aftermath were kept away from the public. The true horror of Godzilla isn't in the shock of a massive reptile rampaging through Tokyo, it's the effects of atomic energy which go beyond fiction, and this films enabled audiences to get a glimpse of what that may have looked like. The visual effects employed to portray the destruction is hauntingly similar to the after effects of the atomic bombs. Godzilla himself is part of that atomic by-product, a giant metaphor for uncontrollable force. 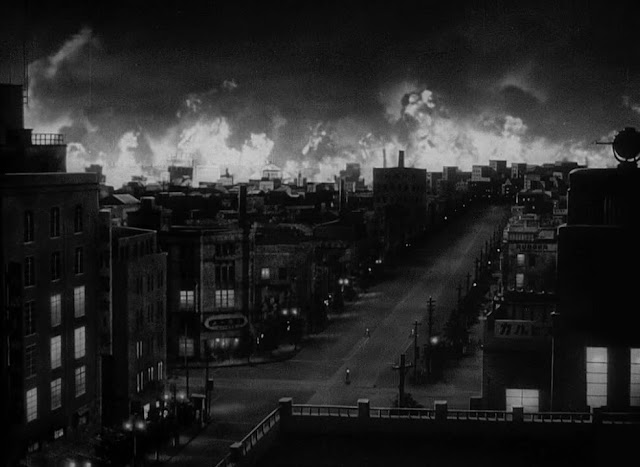 The talents of director Ishiro Honda, producer Tomoyuki Tanaka and special effects wizard Eiji Tsubaraya combined post-war paranoia and inspiration from American movie monsters to create the King of the Monsters. Actually, "King of the Monsters!" was the re-titled and heavily doctored US version of this film, however - this article focuses on the original release with Japanese audio and English subtitles.

There's no delay in building tension - the film opens with the booming drums which represent Godzilla's footsteps and Akira Ifukube's signature theme. The theme would become an anthem for Kaiju fans but it's great to hear its first use here. Personally, I think Ifukube's audio work in the Godzilla franchise is no less important than Tsubaraya's visual effects. His music and Godzilla's roar are synonymous with the series of films and are an integral part of the whole product. The music is genuinely effective in telling its own narrative (such is Ifukube's gift) and the poignant moments aren't just heightened by the melancholy musical cues - they are established by them. In contrast, Ifukube's jaunty numbers are energetic and fun with "Japanese Army March" (as listed in the official soundtrack) being my favourite Godzilla track of all time and making appearances in other films over the decades.

Godzilla himself is scary, over the years he'd mutate into a child-friendly, cute monster - but here he is wild. The animalistic behavior is perfectly depicted when he starts snapping his jaws at a chiming clock tower before toppling it with his clawed hands. The iconic design is firmly established here, the general shape of the body and the rows of spines, the atomic breath with glowing effect, this is considered one of the best Godzilla suits. In profile it's practically perfect with well portioned limbs and a muscular stature (in some films Godzilla looks a little deflated!). Straight on - it looks less impressive in some shots (I think a hand puppet was used to animate the head at times and it looks a little wonky!)

The booming sound of Godzilla's footsteps are a signature cue rather than a mere sound effect. They prelude any appearance in the film and build tension - but that constant, slow, unwavering rhythm sounds foreboding and contrasts with the frantic movement of people running away. Although hardly a benign figure, Godzilla isn't evil - he's just a creature who is the result of humankind's activities, when we see heartbreaking scenes we understand that we are ultimately to blame. Gojira focuses mainly on the argument and discussion around Godzilla and how to deal with him than the actual stomping through Tokyo. By targeting Godzilla in dialogue, the film is able to explore deeper themes around war. The film is preoccupied with radiation and explicit references are made to Godzilla's appearance being as a direct result of H-Bomb testing. There's even a comment made by a commuter about barely escaping the Nagasaki bomb and the act of evacuation. The scenes of destruction are analogous to the war, and the aftermath of a destructive force is depicted as we see stretchers full of injured bystanders, crippled infrastructure and death. The scenes of death are particularly heartbreaking - especially where children are concerned, I found the sound of a child crying out for their dead parent disturbing and I'm still haunted by the acceptance of death by a mother who says to her kids "we're going to join daddy soon".

The human element to the film give it soul, and the love story between Emito and both the films heroes - Hideto Ogata and Daisuke Serizawa add an extra dimension to the film, especially given their clash of emotion and ideology. This plot runs parallel to the whole film and most of the major characters are linked to them in some way.

We all want to see destruction in a monster movie, and Gojira does not disappoint. This was the highest budget Japanese film ever made when it was released and you can see why. The miniature work is exceptional and under Tsubaraya's guidance various techniques are employed to make the implausible believable. You don't really have to suspend belief much here (there's no Jet Jaguar for a start!) because everything looks so convincing. Yes, modern audiences are used to more sophisticated effects and the truth is that the black and white picture does hide some flaws, but there's no denying that the special effects are a spectacle. I still watch in awe as Godzilla melts steel pylons with his atomic breath - the way they glow red hot and then twist and buckle is incredible - this film is called a masterpiece for a reason! 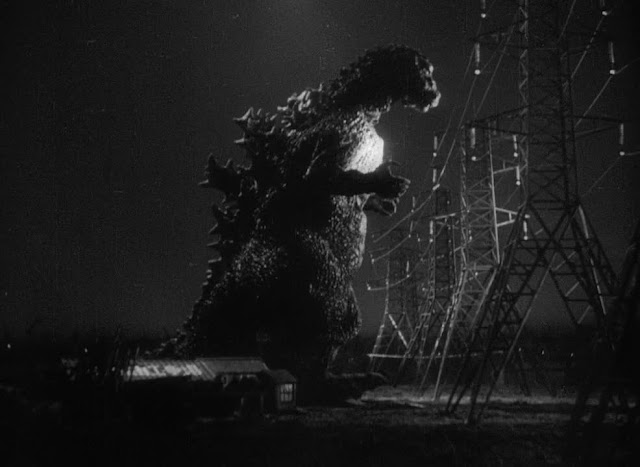 This is a film as much to do with the circumstances surrounding Godzilla (radiation, H-Bomb testing and political relations) as it is to do with the spectacle of a giant monster. The creature was simply a vehicle to open a narrative around weapons of mass destruction. The message in this film is clear - destruction carries the burden of responsibility. Godzilla isn't just a monster, he's man-made disaster.

Remember how cartoons such as He-Man would end with a moralistic moment tagged on before the end credits? (Kids, don't do drugs. And stay away from strangers!) Well the closing moments of Gojira are a direct message to the viewer, a warning that there will be more Godzillas if we continue to destroy ourselves with acts of war.

A solid start, a genuinely dark film with visual effects which still impress 60+ years on. Contemporary issues around war and atomic weapons inject real fear and authenticity into what could have been a dumb monster movie.